A passion for advocacy 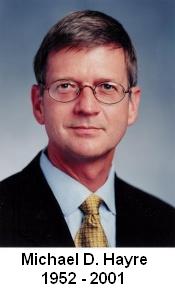 The Americans for Medical Progress Fellowship in Public Outreach is named in honor of Michael D. Hayre, renowned veterinarian, scientist and educator, who served on the Board of Directors of AMP from 1997 until his death in 2001.

Mike’s generous and caring spirit, his passion for science, and his dedication to all whose lives he touched are inspiring. He is remembered as much for his visionary leadership, his many friendships and his commitment to animal welfare as he is for his many important scientific and professional accomplishments.

Mike was an imaginative and dedicated research advocate and was among the country’s foremost experts in the field of laboratory animal medicine. He received his Bachelor of Science degree from Cumberland College in 1974, and his Doctor of Veterinary Medicine degree from Tuskegee University in 1978.

Mike began his professional career in the Army as the Chief of Veterinary Services for the 3rd U.S. Infantry Caisson at Arlington National Cemetery. After a tour of duty in South Korea, he completed his residency in comparative medicine at the Walter Reed Army Institute of Research in Bethesda, Maryland. In 1987, he was elected Diplomate of the American College of Laboratory Animal Medicine.

In 1988, Mike joined the faculty of Rockefeller University and was named Director of the Laboratory Animal Resources Center there in 1991.

Mike became Vice President, Comparative Medicine and Director of the Animal Resources Center at St. Jude Children’s Research Hospital in 1999. That same year, he was elected Chairman of the Board of Americans for Medical Progress by his colleagues.

In addition to his service with AMP, Mike was a consultant to a number of universities, medical facilities and pharmaceutical companies. He authored articles in research journals, was a member of a variety of professional and scientific organizations and active in the Memphis High Technology Council.

Above all, Mike believed in the power and faith of people. He was constantly urging his friends and the many young adults under his supervision to go beyond their comfort zones, to visualize a seemingly out-of-reach goal and then strive for it. His driving force and leadership led to the creation of many of AMP’s advocacy programs.

In August 2001, Mike was hit by a vehicle while jogging near his home. He died in the hospital the next day, having never emerged from the coma caused by the accident. He was 49 years old.

AMP established the Michael D. Hayre Fellowship in Public Outreach in 2008 to honor Mike’s memory and to continue the advocacy he so faithfully pursued in service to medicine and science.