AMP recently learned of this news story published in The Dominion Post, the Morgantown, West Virginia newspaper. The article demonstrates the deep commitment of universities like West Virginia University to the welfare of their research animals while studies are taking place and even afterwards.

Thanks to reporter Gabriella Brown and The Dominion Post for allowing us to reprint this outstanding story.

Mr. Grey the retired white-crowned research pigeon is living his life in paradise after having a bit of help making the journey south for retirement.

“I wanted to do something special for him,” said Samantha Glaspell, a registered veterinary technician at West Virginia University. “I used to work with a local humane society, so it’s always a good story for them to get a different path of life.”

Mr. Grey was one of many pigeons used for behavioral research at WVU. Typically, once pigeons are finished being used for research, they are adopted out to alternative homes, but Glaspell decided to give Mr. Grey a special retirement plan.

Most pigeons used at WVU are White Carneau pigeons, making Mr. Grey one-of-a-kind at the university. White-crowned pigeons are primarily found in the Caribbean as well as in southern Florida.

So, Glaspell decided to make the more than 24-hour road trip down to the Florida keys to return him to close to his natural environment.

“If you can make a difference in the life of just one animal, you get a little bit of personal satisfaction,” Glaspell said.

He now resides in The Monroe County Sheriff’s Office Animal Farm in Key West, Fla., which is home for an array of animals, from horses to sloths.

Some of the farm’s animals are donated like Mr. Grey, whereas others were intakes due to abandonment, abuse or confiscation. The animals are cared for by inmates from the Key’s only jail facility. Inmates are given the opportunity to learn animal husbandry skills they can use later on as well as a chance to give compassion and care to the animals on site.

Glaspell didn’t hit the gold mine on finding a new home for her feathery friend on the first try. Before finding Mr. Grey’s forever home, she said she explored five to 10 different local options before deciding to bring him to Florida.

“After learning more about her sanctuary and the care that she takes for the animals, I felt even better turning him over into someone’s hands like that,” she said.

Her work didn’t start the day she loaded up the car for the trip. Instead, it took months to prepare Mr. Grey for the long journey.

She said birds like him can become easily stressed in certain situations, and gaining his trust was essential before making the trip. Glaspell worked with him daily, interacting and talking with him to get him used to her and to her voice.

On the day of the trip, it was clear Mr. Grey was ready to go.

“It was funny because the morning of, he jumped into my arms,” she said. “When I opened up the cage, that was the first time he ever flew to my chest.” 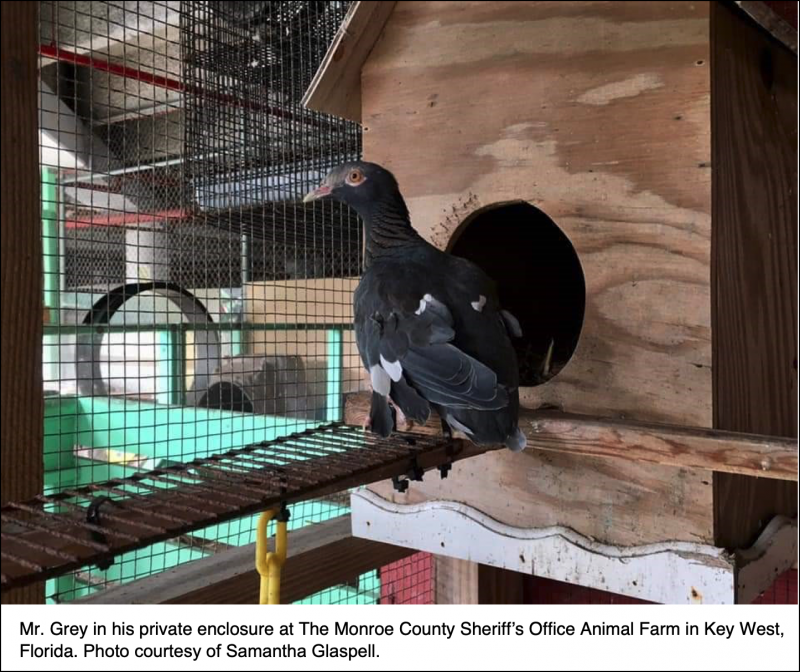 Before being given the opportunity to live out the rest of his life in paradise, Mr. Grey was used in studies to observe how changes in the environment affect certain behaviors. Although some of the pigeons are used for behavioral research for more than a decade, Mr. Grey retired in his youth at about six years old.

The experiments conducted are intended to observe how certain environmental changes influence behavior. Dr. Michael Perone, professor of psychology at WVU, uses pigeons in his studies as well as rats. He said pigeons offer special advantages to other research animals. They have long lifespans, sometimes living as long as 20 years and have excellent visual systems that are comparable to humans. They are also attentive to situations in which they can earn food.

“You put those three things together and it makes them really excellent subjects to use in our experiments,” he said.

For the purpose of the behavioral research conducted at WVU, Perone said researchers are interested in the pigeons more as models that can represent organisms with relatively complex central nervous systems. The behaviors observed in pigeons can help answer important questions about human behaviors.

Anthony Munn, director of the Office of Animal Welfare, said the story of Mr. Grey is one that speaks to the dedication WVU has to the care of research animals both during and after being used in research.

“We take the obligation to provide good animal welfare and good animal use very seriously,” Munn said. “This is one way we can show it to the community.”