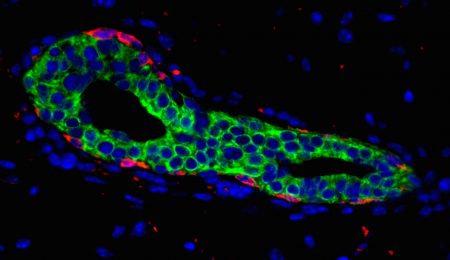 A Penn-led team identified Dll1, a signaling molecule as a marker of mammary gland stem cells, and one that plays a vital role in normal development of the mammary tissue. Above, a cross-section of a mouse mammary gland. (Image: Sushil Kumar and Rumela Chakrabarti)

The human body develops most tissue types during fetal development, in a mother’s uterus. Yet one only tissue develops after birth: the mammary gland. This milk-producing organ, a defining characteristic of mammals, is also the site of one of the most common cancers, breast cancer, which affects roughly one in eight women in the United States over the course of their lifetime. Read more.

Published May 17, 2018, by Penn Today, Office of University of Pennsylvania