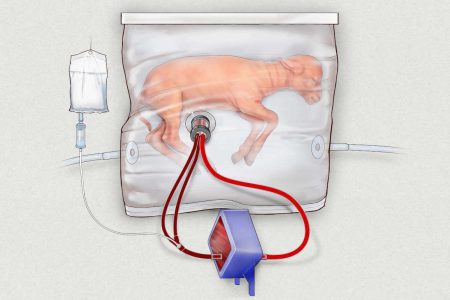 Photo credit: Children’s Hospital of Philadelphia
Premature lambs were kept alive in a bag filled with synthetic amniotic fluid, and their umbilical cords were connected to an external oxygenator.

In a major step aimed at improving the survival odds for extremely premature infants, Children’s Hospital of Philadelphia researchers have created an artificial womb — a fluid-filled “BioBag” that kept fetal lambs alive and healthy outside their mothers until they could survive on their own.
The animals received oxygen through their umbilical cords and continued to develop much as if they had remained in the uterus, leading the team to express hope that the procedure could be tried on the youngest human preemies within three to five years.

The authors of the research stressed that they were not trying to enable the delivery of babies earlier than the current limit of viability, generally 22 to 23 weeks of pregnancy. Read more.