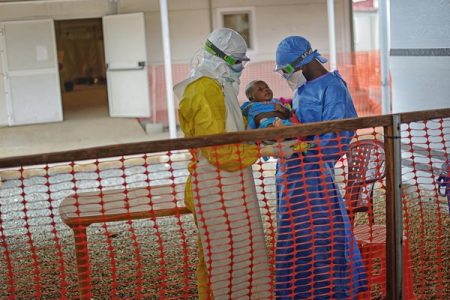 Health workers in November 2015 with Mibemba Soumah, infected by Ebola, at a treatment center in Conakry, Guinea.
Photo Credit: SAMUEL ARANDA FOR THE NEW YORK TIMES

In a scientific triumph that will change the way the world fights a terrifying killer, an experimental Ebola vaccine tested on humans in the waning days of the West African epidemic has been shown to provide 100 percent protection against the lethal disease.

The vaccine has not yet been approved by any regulatory authority, but it is considered so effective that an emergency stockpile of 300,000 doses has already been created for use should an outbreak flare up again. Read more.