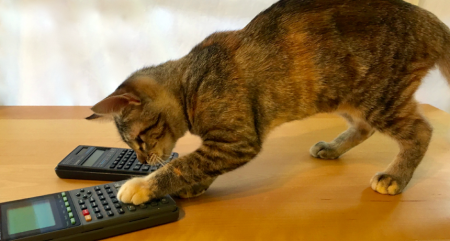 Cats and other animals show quantity-related abilities. Without training, kitties can pick out differences between groups of a few small objects, such as 2 versus 5. However, the felines may be using visual shortcuts.
Photo Credit: S. Zielinski and B. Brookshire

When Christian Agrillo runs number-related experiments in his lab, he wishes his undergraduate subjects good luck. For certain tests, that’s about all he says. Giving instructions to the people would be unfair to the fish.

Agrillo works at the University of Padua in Italy. There, he studies how animals process information. He is finishing up several years of pitting humans against fish in trials. Those trials test their abilities to compare quantities. He can’t, of course, tell his angelfish to choose, say, the larger array of dots. He can’t tell them to do anything. So in recent tests he made his bemused students use trial and error too, just like the fish. Read more.