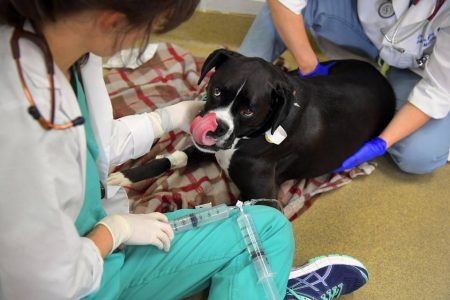 Harley, a 4-year-old boxer who has leukemia, receives an infusion of his own T cells at the University of Pennsylvania’s Ryan Veterinary Hospital in early November. In a process also used in human trials, Harley’s cells, a key component of the immune system, have been genetically modified and multiplied to help combat his cancer. Katherine Frey The Washington Post

Flyer, a 70-pound golden retriever, lies patiently on her left side on an examination table as technicians scurry around, placing little sandbags on her legs and neck to keep her still. She’s getting chest X-rays to answer a critical question: Has a deadly bone cancer spread to her lungs?

When the session is over, Martha MaloneyHuss, a veterinarian at the University of Pennsylvania’s Ryan Veterinary Hospital, glances at the images. “I don’t see anything hugely obvious,” she says, “but we’ll see what the radiologist says.” Oblivious to the good news, Flyer hops down the hall on three legs, eager to find her owner.

After the 8-year-old retriever began limping last year, she was diagnosed with osteosarcoma, a painful, aggressive cancer that often strikes Great Danes, Irish wolfhounds and other large breeds. At Penn Vet, she got the standard treatment: One of her left legs was amputated, and she underwent chemotherapy. Read more.

Published by The Island Packet November 26, 2016