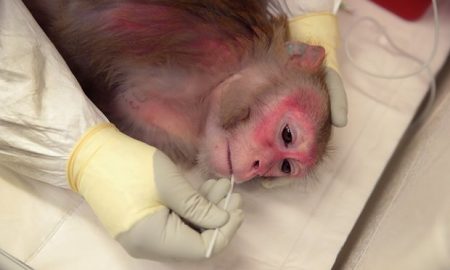 Saliva is taken from a pregnant rhesus macaque monkey infected with Zika at the Wisconsin National Primate Research Center in the US. Photograph: Scott Olson/Getty Images

Letter to The Guardian

Nonhuman primates have long played a key role in life-changing medical advances. A recent white paper by nine scientific societies in the US produced a list of 50 medical advances from the last 50 years made possible through studies on nonhuman primates. These included: treatments for leprosy, HIV and Parkinson’s; the MMR and hepatitis B vaccines; and earlier diagnosis and better treatment for polycystic ovary syndrome and breast cancer.

The biological similarities between humans and other primates mean that they are sometimes the only effective model for complex neurodegenerative diseases such as Parkinson’s. More than 10 million people suffer from Parkinson’s worldwide, and a recent study estimated that one in three people born in 2015 will develop dementia in their lifetime. Primate research offers treatments, and hope for future treatments, to patients and their families. Already over 200,000 Parkinson’s patients have had their life dramatically improved thanks to deep brain stimulation surgery, which reduces the tremors of sufferers. This treatment was developed from research carried out in a few hundred monkeys in the 1980s and 1990s. Read more

Published by The Guardian September, 13 2016